What Is Salt Nicotine and How Does It Differ from Common One? | VapeExpo Moscow

Home
Industry news
What Is Salt Nicotine and How Does It Differ from Common One? 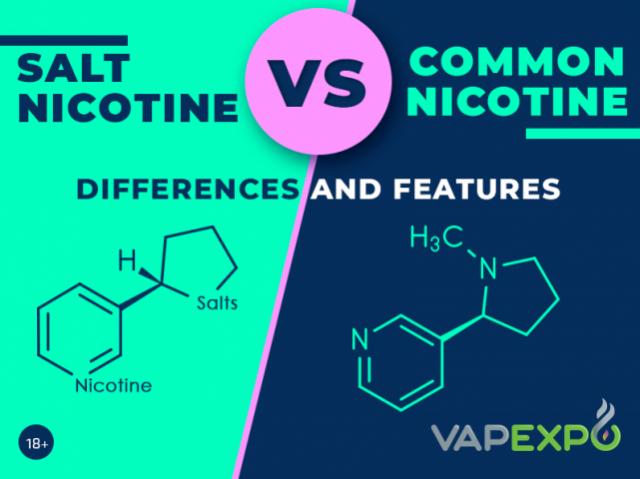 What Is Salt Nicotine and How Does It Differ from Common One?

The popularity of salt nicotine grew in 2015, and it became widely used on the Russian market in 2018. This kind of nicotine differs from the conventional one and enjoys popularity among vapers. Why is it so special and in-demand?

Nicotine salts: what is it?

Salt nicotine (salts) is an artificial-synthesized variety of ordinary nicotine, which is analogous to the human body’s pH in terms of the acidity level. It is produced by mixing freebase nicotine with a certain amount of acids. Obtained nicotine salts are pure and well digested, thus saturation of nicotine is faster.

Synthetic nicotine salts are as close as possible in the composition to the analog, nicotine contained in tobacco leaves. E-liquids based on salt nicotine have the same effect as cigarettes, the only difference is that vapor substances cause much lesser harm to health.

Salt nicotine is not totally safe, as it is also addictive. However, salts are officially approved and permitted for sales in the USA and the EU by the Food and Drug Administration (FDA). This supervisory authority thoroughly monitors products undergoing a checkout, and its decisions are trustworthy.

The substance was created and patented in 2015 by PAX Labs, an American company producing e-juices for Juul branded devices.

What are the differences between salt and common nicotine?

One has been using free or freebase nicotine to make cigarettes since 1960. To produce it, the natural nicotine’s pH was changed using ammonia for quicker digestion. This feature was applied by Phillip Morris cigarette manufacturer, which owner consequently earned millions of dollars.

Freebase nicotine is also included in e-liquid content, alleviating nicotine hunger. At the same time, this agent has a substantial disadvantage: high-concentrated free nicotine combined with vapor extremely irritates the throat. Vapor becomes quite tough, providing creepy experience, which frightens away smokers trying to replace cigarettes with a vape. Salt nicotine solves this problem because of having the minimum impact on the body, causing the low throat hit, and digesting better.

The main feature of salt nicotine e-juice is that vapers feel saturation instantly due to the proximity to the human pH. The acidity level of free nicotine is 10–11 units and the rate of salt one is 6–6.5 units similar to water criteria, resulting in easy digestion. Besides, salt nicotine remains in the body longer, and there will be no need for frequent vaping.

Special pod systems based on salt nicotine produce lesser vapor, making the process almost invisible. Therefore, vapers do not cause any discomfort to surrounding people. There are salts with a lower concentration of nicotine that can be used in traditional devices.

Pros and cons of salt nicotine

Like any other e-juice matter, salt nicotine has positive and negative characteristics. Before tasting it, you should thoroughly examine all subtle aspects and assess its impact on the human body.

The low throat hit is considered an advantage of salt nicotine, but it can lead to overdosing. It can happen if users, feeling no discomfort, vape more often, and the concentration of salts in their blood will exceed the maximum permissible dose.

The oversupply of salt nicotine in the body can increase the blood pressure as well as cause the headache, dyspnea, and nausea. Such an effect appears when using salt nicotine e-liquids with inappropriate devices and in case of non-stop vaping.

Although salt nicotine has far fewer foreign materials and its own flavor unlike conventional one, it affects general characteristics of e-liquids. Besides, salts have a stronger effect on the human body.

Salt nicotine and e-juice flavor. Salts do not give foreign flavors, but the density of salt nicotine e-liquids is lesser than the density of free nicotine ones. It means that DIY e-juices will require more flavoring agents to improve the taste and a bit different correlation of ingredients.

Factory-supplied salt nicotine products provide the worse intensity of flavors than conventional ones. Take into account that salts are primarily intended to supply the body with nicotine rather than to transfer excellent taste.

Moreover, nicotine hints are lesser perceptible in salt e-liquids. To feel at least a bit of substance taste (salts), you should try an e-juice without any flavor additives.

Impact on the body. Salt nicotine, as well as the traditional one, is considered a harmful stimulator resulting in addiction. The process is faster for those who did not smoke earlier, as salts are absorbed into the blood stream at an accelerating pace. Common nicotine boasts fugitive features and volatilizes quicker. Its addiction is slower (but it is consumed at higher doses).

Those who have previously tasted conventional e-juices will shift to salt ones without body changes. However, returning to freebase nicotine can be harder (another concentration, severe throat irritation).

Salt nicotine is strong: it can significantly raise blood pressure and accelerate the heartbeat. The most concentrated e-liquids are applied in pod systems. Nicotine content will be lower in other devices.

Salt nicotine and vaporizer. Vaporizers become dirty too fast in case of using salt e-juices in common gadgets. This is because heated salts more actively lodge on gadget elements. Pod systems are a different story: their construction is designed for salt nicotine, and a cartridge resource clearly corresponds to the vaporizer expiry date.

What devices are better for salt nicotine?

With salt nicotine being aimed at pod systems, it is more efficiently and sparingly to vape salt e-liquids using them. Such devices are small, easily placed into a pocket, convenient to carry, and comfortable for brief smoke breaks. Salt nicotine is also designed for high-resistance devices (1+ Ohm).

Apart from special systems, salt e-juices are appropriate for eGos. Due to the increasing popularity of salts, manufacturers have started producing huge volumes of weaker e-liquids that can be used in Sub Ohm devices.

Vapers express different opinions regarding salt nicotine: everything depends on individual body characteristics, availability of nicotine addiction, taste preferences. Some vapers on DIY e-juice forums stress a pure taste of salt e-liquids, while others state that it is not quite vivid in comparison with freebase nicotine.

Many users are negative about side effects such as coughing, dizziness, and vomiting sickness, but these symptoms usually suggest nicotine overdosing or its bad quality. Overuse of salt nicotine led to trouble sleeping among some vapers.

Users mention the following positive aspects: immediate saturation of nicotine, reduction of smoke breaks, economical use, and usability of special systems for salt e-liquids. Some consumers mention that salt nicotine allows to decrease the craving for cigarettes, or even to give up smoking.

Salt nicotine has a range of advantages, including rapid blood saturation of nicotine, long-lasting effect, and absence of admixtures in the substance composition. It makes salts a perfect option for those deciding to leave off smoking and choosing vaping as an alternative. Furthermore, salt nicotine is able to provide e-liquids with unusual tastes, which can intrigue savvy vapers who cannot use freebase nicotine for whatever reason.

Meanwhile, you should use salt nicotine carefully, taking into account potential overdosing: salts do not cause the itchy throat, thus the body will fail to inform vapers of stopping. Oversupply of substance can result in coughing, dizziness, and pressure defects. That is why users should vape salt e-juices in a dosed manner without shifting to a non-stop mode. They should use special pod systems allowing to control the nicotine consumption and make vaping as money-saving as possible.