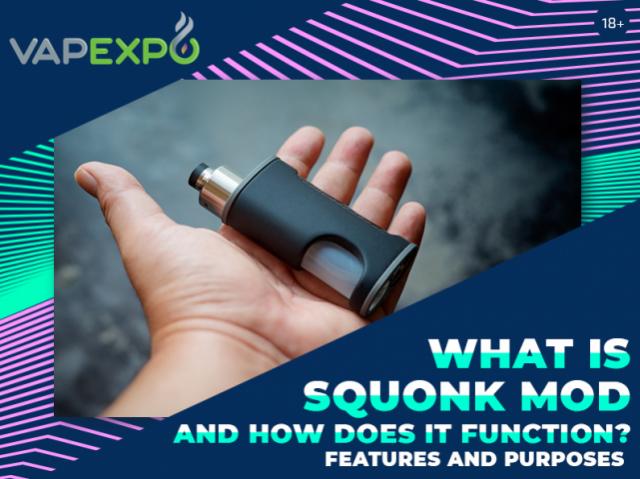 A squonk mod is a device for the convenient use of RDA: the main thing is that it does not require constant refilling. How is this implemented? Read the material containing full information about squonk mods and their types.

Squonk, or RDA for lazybones

To realize the squonk concept, you should gain insight on the RDA construction. These devices are rebuildable vaping bases. RDA advantages include pretty dense and rich vapor as well as great taste experience. However, the device has one significant disadvantage: RDAs should be frequently refilled, i.e. adding some drops before each vaping.

If the filling hole is in the body top part, it does not cause substantial inconveniences, but there are RDAs with lower filling. Such devices are troublesome in usage, although many vapers like them because of excellent taste transferring and high-quality vapor. Squonk modes are invented for lazybones.

The squonk mod is a special system with a built-in e-liquid bottle. E-juice goes to RDA using a hose connected with the device via special holes. It is similar to the pump concept: vapers press on the flexible tank, e-liquid gets into thin connecting tubes and goes to RDA.

The author of the idea was a common vaper, one of the users on popular E-Cigarette Forum, who felt discomfort of constant RDA refilling. He designed a squonk prototype in 2009 for personal use rather than for sale and boasted this fact on the forum. A more initiative forum participant borrowed this idea and establish his own company producing squonk mods. Vapers know it as REO, a manufacturer of conventional squonks.

Major vaping market players also focus on their own research in this area, creating both mech mods and board-based devices. Unlike the first simple systems, cutting-edge squonks have the whole set of features appropriate for a comprehensive mod.

Currently, the market offers devices by Steamcrave, Aspire, Vandy Vape, and many other companies. Besides, REO keeps producing its gadgets, but it has not introduced any significant upgrades. The company is limited to advanced models with fixed bugs.

Popularity and types of squonk mods

The first squonk mod was released in 2010. It drew vapers’ attention but failed to become actually popular. They had certain gaps such as the size and production complexity, thus not all manufacturers opted to develop innovative models. Many vapers rely on their own creativity, turning ordinary mods into hand-made squonks.

Nowadays, there are squonk devices that can satisfy even the most demanding users. The market has different forms, sizes, upgrades, colors, and types of such mods.

One of the first squonk devices were mech mods with integrated tanks. Afterwards, we could see heavy box mods with boards, which provided an extended set of features: temperature control, variable wattage, and compatibility with RDAs of different diameters. These aspects encouraged the increasing popularity of squonk mods.

Mechanical squonk mods are similar to common mech mods. They are presented as individual models or as kits, for instance, GeekVape Athena Squonk Kit. These kits are often user-friendly, as they are light and equipped with the minimum amount of buttons. Disadvantages of mechanical squonks are the absence of protection and voltage regulation.

Unlike mech mods, board-based devices feature the protection from voltage drop, short circuits, and incorrect coil bugs. Squonks on boards are issued in individual kits consisting of a box mod and RDA. For example, Pico Squeeze Kit and Kangertech Dripbox 160W. Due to their characteristics, electronic squonk mods are convenient for beginners.

Squonk mods can be a proper and practical solution for RDA lovers. They will get rid of a necessity to regularly refill RDA and carry around a big e-liquid tank. Squonk mods have a range of other benefits as well.

How to select a squonk mod?

Squonk mods are more expensive than standard vaping devices, thus you should choose them thoroughly in order not to waste money on an inconvenient device. Chinese products are relatively affordable, but it is referred to pre-fabricated gadgets. Custom squonks will be rather expensive anyway, and the order will be delivered in two weeks. Such devices are produced by Custom Classic Mods, Tmod Customs, Sunbox, SVA, Art&Mod, and Lukkos.

Before choosing a squonk for previously acquired RDA, you should check whether it has special holes for the hose. By the way, take into account a diameter of the device that will be used along with the mod. Manufacturers increasingly equip RDAs with convenient central pins, thus holes compatibility problems are a rare phenomenon.

Here are some squonks that should be used in up-to-date mods: Tobeco Torque, Ohman Pancake, Narmods NarDA, and Origen V3 Dripper.