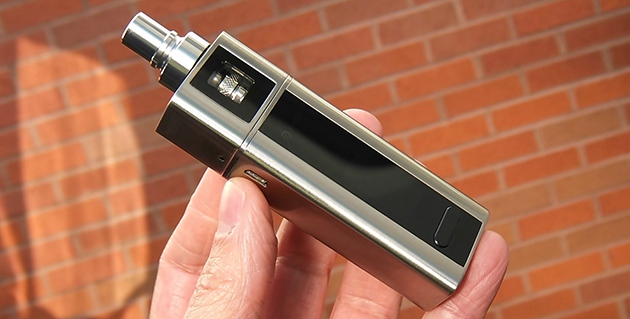 Cuboid is arguably one of the most popular box mods in the market of electronic inhalers. Due to regular firmware upgrade, that allowed vaping at higher power levels, this device has become attractive for vapers of any level.

Nevertheless the majority of potential customers do not belong to vaping trend and Cuboid is too big and impractical for them. Therefore, Joyetech has decided to settle for a compromise and launch Cuboid Mini Kit. Apart from being an undersized version of the mod, this kit includes Cuboid Mini atomizer, completed in corresponding style. At the same time the power of device remained at a decent level of 80 W.

The first task, which manufacturer wanted to complete, was to stop using two 18650 accumulators, which made the device substantially heavier than its minor counterpart. Unfortunately many people would prefer to carry their inhalers in the inner pocket of the jacket, and sizes of flagship Cuboid hardly allowed doing it. The only thing that was done was the restriction of export power. But functions of short-circuit protection, recharging, etc. remained unchanged.

It was decided to equip Cuboid Mini with 2400 mA built-in accumulator.

It is the most interesting part of the device. The point is that Cuboid Mini Kit tank has a rectangular shape. You should admit that such design is quite rare. But the main advantage of this atomizer is the new format of coil – 0.25 ohm Notch Coil, which can be used at power level from 30 to 70 W. The new development is also used by Wismec company, which is virtually part of Joyetech.

Moreover, it’s very convenient to fill the tank and it has a large e-liquid capacity of 5 ml.

Naturally, its unique shape is simultaneously its disadvantage, as far as it won’t look good with other mods.

You can buy Cuboid Mini Kit only abroad. Its average price is around $55. You can also order each component separately at fasttech.