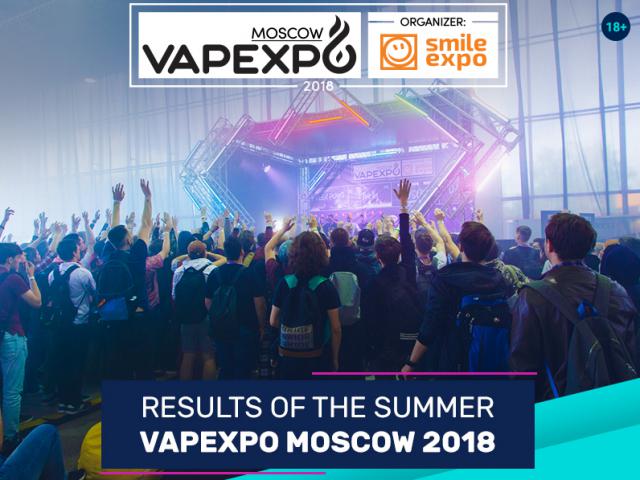 On June 8 and 9, around 4000 vapers gathered at ECC Sokolniki to spend a nice time at the seventh VAPEXPO Moscow. They were offered 70 themed booths, spectacular show, and top-class devices at the Mech Mods Alley.

Organizer of the event Smile-Expo, which has 12 years of experience working in the exhibition market, hosted the most comfortable event possible. This time, VAPEXPO Moscow 2018 provided all conditions required for productive business negotiations.

Participants and guests spent June 8, a B2B day, in a calm atmosphere, talking about business and testing the products presented at booths. PRIDE helped to create an atmosphere for efficient networking by arranging a special business area.

The second day was dedicated to the show program: everyone who came to have a blast received a maximum of fun, giveaways, mech mods, and e-liquids.

Distribution of Vape AWARDS and networking

The main event of the business day at VAPEXPO Moscow 2018 was the roundtable with top experts of the vape market. No reports and lectures – only live communication and discussion of timely tasks aimed at the development of the industry. The audience actively debated with specialists. During the discussion, participants and guests considered the issues of the legal framework for vaping in the Russian Federation, the latest market researches, and the problem of dumping.

• Ilya Kalinin, co-founder of URBNVAPE, a company that accounts for 4% of the Russian e-liquids market;

• Andrey Zykov, founder of CrazyVapor with more than 5 years of operation in the Russian and international vape markets;

• Dmitry Vladimirov, the head of the Association of companies engaged in the non-medical inhalation industry (vape products) –SPINI;

Organizers express gratitude to the moderator of the roundtable Evgeniy Belyavskiy, a vape industry expert, founder of INTRUE Lab.

Following the active business discussion, Vape AWARDS ceremony started on the main stage of the event. Preselection was conducted via online voting, and final winners were chosen by bloggers from PAR_NYXA at the event.

This year the best brands are:

The second day of VAPEXPO Moscow 2018 – striking and roaring – was opened by МС Seraf1mm and official vlogger Black Star MAD LIMP. Girls from YoVape, the sponsor of the event, performed a vibrant dance show.

Contests for genuine vapers added some special drive to the day. One of them was Guess E-juice, where everyone could test and guess e-liquid flavors from PRIDE. Everyone received an e-liquid for participation, and the winner – the whole line called FROZEN YOGHURT.

Not a single vape gathering can do without a cloud chasing championship! Winners of The World Series of Vaping in the Up to 80 kg category:

Vape Tricks Battle was organized for fans of fine vaping. It was judged by the team of trickers Babylon'a CLOUDFUCKERS. Yevgeny Sverchkov became the winner.

The total prize fund was 100,000 rubles. Apart from traditional competitions, something new was added: a trick contest called Create a Tornado, judged by … Tony Tornado!

The thickest vapor could be seen above the Mech Mods Alley, as it featured various mech mods for beginners and experienced users. However, the main feature of the Alley was the fact that the devices comprised the prize fund: winners of contests received those mech mods, and the rest of devices were thrown from the stage as giveaways!

Besides, one could hit the jackpot during giveaways from YoVape, Red coil, Daddy Vapors, Ezo eliquid, Vapor Art, My Blue Babylone, Vape Molecule, and Ice Paradise.

Despite all strengths and coolness of VAPEXPO Moscow, many people noted that the exhibition turned out to be smaller than usual. Organizers did not leave such feedbacks unnoticed.

“Every industry experiences ups and downs. And it cannot but have an impact on the exhibition, as we live and breathe together with the market. But we already have a plan intended to make the next VAPEXPO a jolt of fresh air,” noted head of the project Ilona Yuvchenko, “We have analyzed the feedbacks and understand that our attendees are mega cool experts and have seen a lot. The team does its best to impress everyone.

VAPEXPO is primarily a place where one can see and test novelties and simply have a rest in a pleasant friendly atmosphere. We do not step back and believe that it’s just a sunset and a new era of vaping will come with the dawn”.

We are looking forward to seeing you at the next VAPEXPO Moscow that will be traditionally held in December (14-15.12.2018) to warm you up for the winter!