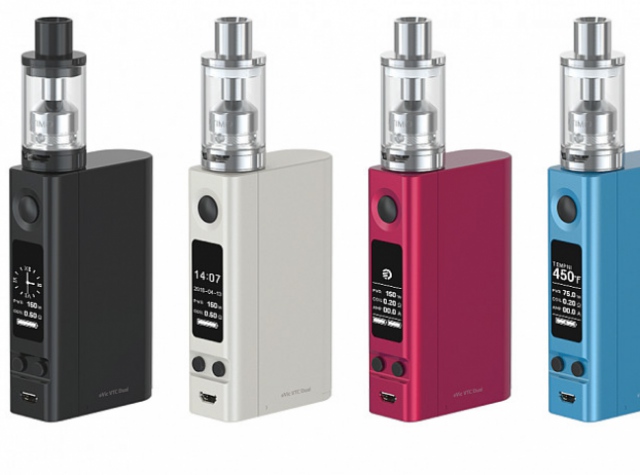 It can safely be said that eVic VTC Mini is the most popular box mod in the world. Lots of updates and even a couple of games were launched for it, but it has not changed drastically for a long time. Currently, the device with a capacity of 70W looks a bit simple. That’s the reason why representatives of Joyetech have decided to create eVic VTC Dual.

To begin with, the manufacturer has factored in the enormous popularity of his pet project, and did not risk changing the design of the device when creating a dual battery version. All changes implied the increase of its sizes. Now it contains two 18650 batteries. But wait – two battery covers come with the device. The thing is that new eVic can be used with one cell, as well as with both of them. Depending on the connected battery module, you have an opportunity to choose the mod’s format. With the back cover for one battery eVic looks the same as the last generation. To tell the truth, in this case the maximum output is 75W instead of traditional 100W.

Joyetech has made a wise decision. In fact, new eVic VTC Dual is a fresh version of the popular mod, which was and will be forever popular among vapers of all levels. But the second battery and increased capacity have made this model even more attractive.