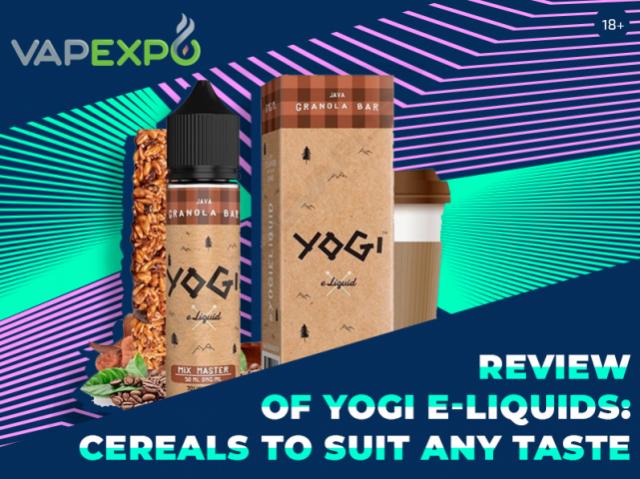 American line of e-liquids with oat and nuts flavor and original supplements will surprise vapers that like sweet cereal tastes. YOGI E-Liquids from California-based manufacturer are 8 ingenious blends. Do you want to get to know more about them?

California-based Liquid Guys Distribution is a distributor of premium e-liquids. They supply products to different countries of the world including Russia. Liquid Guys represent several well-known brands and a wide choice of flavor profiles including:

All e-liquids are produced in compliance with sanitary standards, using certified and safe ingredients, and following the requirements of the FDA. The company often participates in vape events held in Spain, Russia, France, the UK, Canada, and other countries of the world. Liquid Guys Distribution stands out for the original composition of blends that are completely safe for vaping. What are the peculiarities of YOGI E-Liquids?

All YOGI E-Liquids are designed, developed, and produced in the USA, contain high-quality nicotine Heartland. Besides, the manufacturer offers salt e-liquids. Yogi series is made of eight flavors (Lemon, Java, Apple Cinnamon, Vanilla Tobacco, Peanut Butter Banana, Blueberry, Original, and Strawberry) based on cereals and muesli (granola). E-liquids are available with the following nicotine concentration: zero, 3 mg, and 6 mg. The proportion of ingredients is 30PG/70VG for ordinary nicotine blends and 50/50 for salt blends.

Bottles and packages of YOGI

YOGI E-Liquids come in rectangular boxes made of craft cardboard. Design is simple and eye-catching, the name of the line, flavor, and e-liquid capacity are well readable. Unicoloured background of the box is decorated with small images of spruces and mountain ranges (previously, there were images of a funny hipster bear, but he had to make room for important information).

E-liquid bottles are produced by Chubby Gorilla. YOGI line offers 60 ml bottles with ordinary nicotine and 30 ml bottles with salt nicotine. The cover has a first opening controller and is childproof. There is production date, batch number, and expiration date specified at the bottom. Besides, bottles have a standard long dropper, which is convenient to refill RDAs, eGos, and other devices.

YOGI E-Liquids will catch the fancy of the vapers that love granola (a stick or a mixture made of oat, nuts, and honey). Each of the eight e-liquids is a unique combination of cereal and honey flavors and additional ingredients that emphasize the main flavor. Let’s see their peculiarities.