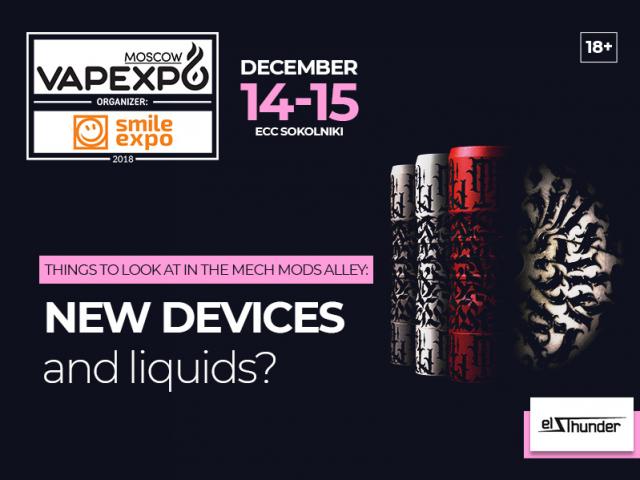 Meet constant participants of VAPEXPO Moscow, one of the best mech mods manufacturers in Russia – El Thunder! They will present their new designer’s mech mod and an exclusive line of e-liquids at the meetup in December.

El Thunder is one of the most anticipated participants of the exhibition’s Mech Mods Alley. At the past event, the team was remembered for the creative design of the booth and original outgiving of mech mods to contest winners. They presented devices together with real and tasty dumplings (the company name is often compared with tandoor – an oven).

This time, they will present novelties at the VAPEXPO Moscow 2018 held in December. And we are eagerly waiting for their arrival!

Apart from new mouth-watering mech mods, the team will bring El Thunder 20700 ArtistCollection designed by Pavel Almazov! The artist of Russian calligraphy, author of fashion designs that also makes freehand tattoos (without a prepared sketch). His clothes are popular among such celebrities as Noize MC, ATL & Amatory, and Ka-Tet.

This time, El Thunder will present their own line of e-liquids. That is not a joke! The original line consists of three flavors. Each of them is worth of attention, as the description itself sounds unbelievably appetizing.

One can endlessly look at bright photos of cool mech mods by El Thunder. But what’s the point in just looking? Come to the exhibition: test, assess, and hurry to buy! El Thunder devices are sold like hotcakes.

The team will also present their novelties on the B2B day, December 14, on the main stage of VAPEXPO Moscow 2018.