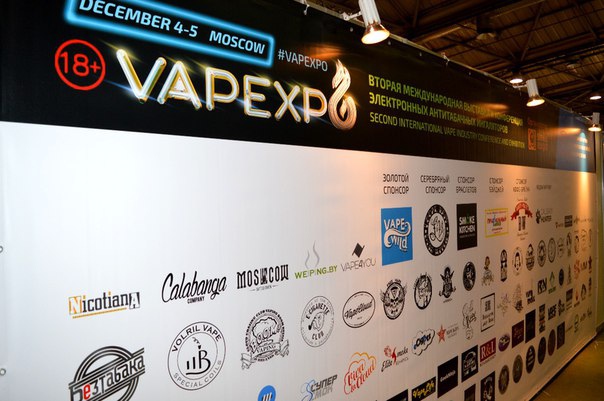 Business representatives participated in the conference with a uniquefor Russia speakers:pioneers of the industry whose success one should follow.

Producers of e-cigs,eLiquids and accessories presented their best products within the exhibition, and now vapers from all the CIS states know about them.

Vape-community members learned about new e-cigs and eLiquids, won a dime a dozen of prizes and learned a lot during the workshops.

Now about everything in detail.

The first day of the conference was dedicated to the foreigner’s speakers. The floor was taken by the representatives of E-Cigarette Club, AtomVapes, American Vaping Association, Vape Magazine and many others. Theyshared the experience of carrying on a dialog with the officials, effective sales instruments, as well as warned Russian business against making the same mistakes as they did. Moreover, speakers told about peculiarities of the US and China markets.

Get more information on the first day.

The second day of the conference was dedicated to Russian and the CIS states market analysis, as well as business strategies and models developing (not about twerkgirls who backed up the event).

Anton Belov told aboutvaping lobbying and promoting among domestic consumers, while Alexey Niemczyk, the founder of  ViVA la Cloud shared his vision of how e-cigs arecovered in mass media and how it may affect market participants.

Speakers shared their experience in Vape- shops franchising and secrets in sales. Eugeniy Bielawskiy, INTRUE Lab Managing Partner spoke about his experience in eLiquids promotion in the domestic market.

Special attention during the second day was drawn to the panel involving top-managers of leading companies: Maxim Krivoruchko, the CEO of Super Smoke Trade, Anna Manuylova, the Development Director of the same company, Sergei Kolkov, the CEO of Svoyomesto Sergei Kolkov, as well as Maxim Lipchenko,the founder of Papiroska.rf, Dmitry Borisov,the CEO of Vardex and Konstantin Polovnikov, who represented Moscow Vape Custom Shop.

Top-managers discussed regulatory risks in market regulations, difficulties of founding a company, as well as successful ways of its promotion.

In the end of the day Vapor Distribution and E-Сigarette Club organized networking afterparty for VIP-conference members. Figures who set market trends gathered together in Obolenskiy Bar in the center of Moscow.

The most active vapers took part in cloud-contest, the Cloud Chasing Championship, winners of which automatically get a place in the finals of the World Series Of Cloud Chasingin London (W.S.O.C.C.).Participants were divided into groups and winners inside the group encountered each other in the finals on the main Vapexpo stage.

The winner of the contest became Alexander Dragunov. Now he will spend five intense daysin the British capital and show his skills. Congratulations to Alexander and wish him good luck in the finals!

In addition, the build-contest winner also got a present. Choosing the best build was a logical end to the coil winding workshop. A world-famous VGOD performed atrick-shows right on their stand - and it was a real magic. One could not only watchthe tricks but also learn how to do them within a special workshop.

What was the most interesting for theparticipants

We read reviews about Vapexpo in social networks and choose the main ones:

We would like to thank everybody for contributing to the development of antismoking culture in the CIS states as well as for taking part in Vapexpo. Special thanks to our sponsors: KVASS, Vape Wild, Local Vape, Smoke Kitchen, Baker White, «Правильный выбор», E-Сigarette Club,  Wingle Group.  It was a real pleasure to work with you!

We invite you to co-organize the next Moscow Vapexpo, which will be held in June 2016.