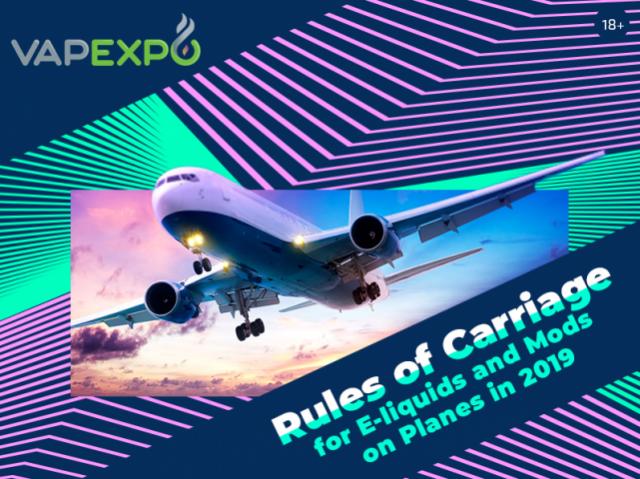 Don’t you want to part with your favorite mod and set of e-liquids even during your trip? Find out what vape devices are allowed on planes and feel free to pack your suitcases. And don’t forget to learn what and how you can bring back to Russia.

Can you carry a vape mod in hand baggage?

The law does not forbid carrying electronic vape devices in hand baggage. It does not rule out the possibility of the airline having interior rules, but for now, there have not been any strict restrictions for vapers yet.

You can take a vape device on board but you cannot use it during the flight. Some rules concern the number of mods allowed for one passenger. If you carry more than three electronic devices, transportation is categorized as commercial and you have to pay tax.

Can you put e-cigarettes in your luggage?

It is not allowed to put mods with batteries in the luggage. This restriction is explained with the fact that devices are fire-dangerous, can auto-ignite, and so pose a danger to flight safety. Such incidents have already taken place in air transportation, so it is strictly forbidden to put a mod with a battery in luggage.

It is allowed to take the battery out of the device and then you won’t have any problems. The mod will go to the luggage compartment and you will have to place the lithium battery in your hand baggage. You can carry not more than five devices free of charge in such a way.

Can you charge and use a vape device onboard?

Even if there are sockets in the passenger compartment, it is not allowed to charge vape devices using them (they are intended for mobile phones and laptops). Of course, you can carry a power bank in your bag and charge the mod with its help.

The same strict rules are valid for vaping in the compartment. It is forbidden similarly to smoking, although vaping is harmless for people around you. The reason is that vapor clouds can scare some people, be unpleasant for them, or provoke smokers into taking ordinary cigarettes.

How to carry e-liquids on a plane?

It is allowed to carry e-liquids in your hand baggage. They fall under the same rules as shampoos, alcohol, perfume, toothpaste, and other similar products. Most airlines limit the total volume to 1 l per passenger.

You cannot carry the liquid in one big package. Instead, you have to pack it in bottles up to 100 ml each. Besides, you have to place every bottle in a thick transparent bag. The ideal choice is a zip lock bag. Liquids in containers above 100 ml are not allowed even if the container is not full.

You can pack the liquid on your own after you buy the bag at a stationery shop or take it at the check-in desk free of charge. It is not necessary to pour the liquid in a new bottle: if the volume allows carrying it in the original bottle, you should not bother yourself. The label should contain information about the exact volume.

How to carry vape devices and e-liquids with different airlines?

The rules for carrying vape devices may slightly differ with different Russian airlines but differences are usually unsubstantial. However, make sure to learn the basic requirements and specify nuances before the flight from airline employees (rules can change with time).

Rules for e-liquids coming into Russia by plane

As for the import of e-liquids and vape devices by plane, the rules are analogous as for export (depending on the air carrier). The possibility to import e-liquids that can contain banned substances is worth attention.

This refers to e-liquids with cannabinoids that are legal in a number of countries. For example, the non-narcotic substance CBD, which is contained in industrial cannabis, permitted to cultivate in Russia.

There is no official law to ban the import of CBD, but there are clear rules about tetrahydrocannabinol (THC). CBD is an isomer of THC, which is banned, its use and import are punishable by law. Even if the product certificate specifies a permissible dose, the e-liquid can be taken for a checkup.

If the inspection finds more banned substances or a higher percentage of them than allowed, a criminal case will be opened. It means that you should not risk bringing products containing cannabidiol to Russia.