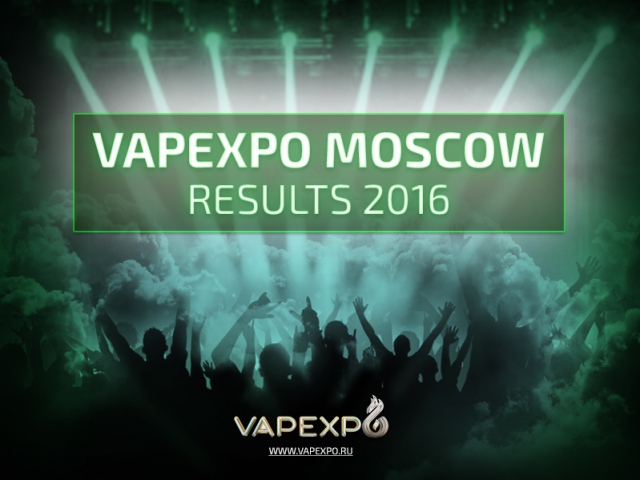 How did 9 December go at VAPEXPO Moscow 2016

On December 9-10, 2016, Sokolniki ECC in Moscow hosted the fourth international exhibition and conference VAPEXPO 2016. The event became a part of a series of vape events organized by Smile-Expo exhibition company, dedicated to the industry of electronic anti-tobacco inhalers. B2B conference, exhibition and show were held simultaneously in three pavilions.

The event was held under the support of Godfather Co, Liquid Guys Distribution, Orion, GILLA, SOSTAV, Local Vape and other brands.

Manufacturers of e-liquids and devices from Europe, the US and Asia did a good job in order to impress vapers with devices, e-liquids, gifts and their own shows. You can look how it was in the “Photo” section at vapexpo.ru, as well as in VAPEXPO group in Vkontakte.

The first number on the program was BMX Show from FOG PRO. Magnificent tricks with BMX inflamed the audience before the further contests.

In charge of positive emotions and drive were DJ Mad Limp and rousing МС Max Larionov, known for the first “Fitness rave” and “Unlimited unleashed” events from Nike.

One of the main events on the 9th of December was a workshop on eJuice mixing from leading mixologist of E-Liquid Lab Juriy Vishnevskiy. Being an author of the recipes of several e-liquid lines, he shared his experience in the creation of DIY juices and told about delicious and poor flavor combinations.

The main winner is Marisha Lonely Rocked – she got a new line of liquids from SMOKE KITCHEN and a cool Alien Kit by SMOK.

Vapers have also highly appreciated participants of Rap Battle, organized under the support of RAP.RU. All the performances were great, but the best one was Max MF (Maxim Olitskiy) from Belarus. He received $1000 and congratulations from a legendary rapper Basta, who judged the battle.

For the first time on VAPEXPO stage there was a performance of a top team Trick Star Gang, which triggered the pavilion with unlimited energy. Vape Tricks Show audience was able to enjoy fascinating variations of rings, fancy figures and waterfalls.

Vape Tricks Battle has licked all creation: every participant was amazing. And the winner of the contest, as well as the proud owner of another $1000, a new line of SMOKE KITCHEN liquids and Subzero mechanical mod from Sub Ohm Innovation, became a member of trick team CLOUDFUCKERS – Quan Ngo.

Jury panel included mentioned above Mihey Medvedev and Alex from VapersMD, as well as founder of vape community and trick expert Vladimir Kotov, author of the most provocative YouTube vape channel {Do0dKING} Nikita Kolesnikov and actor of this very channel Alexandr Krasnov.

Meanwhile, the FIFA Championship was held on a separate stage Vardex. It was commented by famous Vasiliy Utkin.

Read the overall results of VAPEXPO 2016 in Moscow in the next article.