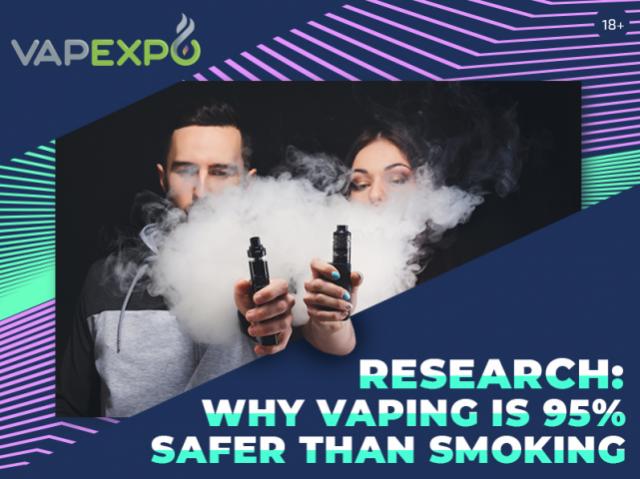 Back in 2015, researchers of Public Health England officially reported that vaping was 95% less harmful than smoking traditional cigarettes. What facts speak in favor of vaping and why vaping is considered to be safe?

Why vape is safer than ordinary cigarettes

Smoking is one of the most harmful habits for health. According to the World Health Organization, it causes the death of 7 million people per year, and this figure will grow to 10 million by 2030. Every seventh man in the world consumes tobacco products, whereas every third man smokes in Russia.

Nicotine provokes addiction, and in the process of burning, one cigarette generates 250 toxic substances, some of which can lead to the development of oncology diseases. Compared to smoking, vaping is almost harmless for people.

For example, e-liquids contain 100 times less of diacetyl that cigarettes. To achieve the same level of air contamination with nicotine in the room of 60 square meters, you need to smoke just for 11 minutes, whereas you need to vape for the whole five hours for the same purpose.

Support of vaping in different countries

In 2017, Tobacco Control published comprehensive research, the findings of which show that the substitution of cigarettes for vape leads to the prolongation of lifetime. Scientists report that vaping may save up to 6.6 million smokers from untimely death in the USA alone in the next 10 years. Similar investigations were carried out in different countries of the world. Some of them support vaping as an alternative to cigarettes at the state level.

The UK. In 2018, Public Health England (PHE) ran a campaign to promote vaping as a substitution for smoking. Earlier, representatives of the organization announced that vaping was 95% safer than smoking. They confirmed this data during the campaign. According to Professor John Newton, the campaign is intended to persuade smokers to shift from cigarettes to safer vaping.

According to PHE, 65-68% of smokers managed to refuse the unhealthy habit thanks to vaping. PHE made a special video featuring healthcare specialists Lion Shahab and Rosemary Leonard to tell how vaping and cigarettes influence lungs. In the video, scientists make an illustrative experiment that shows how much harmful substances contaminate the body in both cases:

New Zealand. A large-scale campaign in support of vaping as a way to give up smoking was also run by the Ministry of Health of New Zealand in 2018. Representatives of the ministry stated that e-liquids hardly contained harmful substances and when compared to cigarettes, vaping did little harm to health.

As part of the campaign, New Zealand set up an official website that promoted vaping as a way to give up smoking. The country’s government also reviews draft laws that will help to regulate vaping making it an affordable way to get rid of tobacco addiction.

How vape helps to give up smoking

Quitting smoking is rather difficult due to addiction to nicotine, which is present in cigarettes in different amounts. Vaping acts as an excellent substitution for smoking, as it can saturate the body with nicotine and do no harm – unlike cigarettes, e-liquids do not contain toxic substances and resins. Vaping has already incentivized thousands of smokers to quit the harmful habit.

According to the French National Public Health Agency, vape devices have helped 700,000 citizens of the country to overcome tobacco addiction since 2010. With the arrival of vape devices to the US market, sales of traditional cigarettes decreased by 11.2%.

Corresponding research was conducted by scientists of the European Union: based on a sociological survey among the EU citizens aged above 15, standalone analytics was drafted. According to its data, 6 million people refused to smoke in favor of vaping and a part of smokers significantly reduced the number of consumed cigarettes.

Here are the general results of the research:

Based upon these results, few non-smokers start vaping permanently. At the same time, smokers that have tried vaping usually successfully give up on traditional cigarettes. In such a way, there are no reasons to fear that vaping can lead to tobacco smoking and addiction.

Possible harm of vaping and how to avoid it

In the process of smoking, cigarette burns and generates resins, aldehydes, and other toxic substances that smokers inhale together with the smoke. During vaping, people get a dose of nicotine if the e-liquid contains it. Can we still think that vaping is totally safe and in which cases?

To understand how safe vaping is when compared to smoking, you need to check up the composition of e-liquids. Their base is made of glycerin and propylene glycol, which are used in the food industry and pharmacy. These substances are harmless on their own but can produce detrimental chemical compounds upon the certain temperature of vaping. Vapers can avoid this if they use vape devices correctly and keep the vaporizing element from overheating.

The main problem of vaping as a substitution for smoking is the nicotine that causes addiction. However, when consumed together with vapor, it does less harm to health than smoking. Besides, people willing to quit the harmful habit can gradually reduce the amount of nicotine and end up with zero nicotine e-liquids. It is important to remember about nicotine concentration, its influence on health, and consequences of overdosing.

Researches prove that vaping is not only safer than smoking but can also act as a perfect method to get rid of the addiction. Healthcare organizations actively support the mainstreamification of vaping, for example, in the UK and New Zealand.

The impact of vaping on the body has not been studied to the full yet. However, its safety in comparison with smoking has been proven by scientists from different countries of the world. To vape with a minimum of risks, one has to check out nicotine concentration and use the vape device correctly.