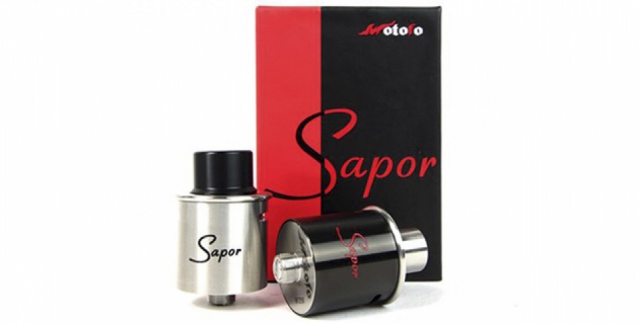 It would seem that the whole enchilada has been already invented, so is it possible to amaze a seasoned vaper? Yes, it is. Sapor RDA from Wotofo is the case (the most important advantage is described in the end of the article!)

It’s hard to decide where to start. Let’s talk about its design first. RDA offers a wide choice of colours, basically as all Wotofo products do. There are subdued and pastel shades, except of standard black, white and iron-grey. Even speckled variants are available, so it won’t be difficult to choose a device to your liking.

Having taken off the cover, you will see three posts. The middle post is paired and has a square base. Screws in the post are hexagonal, which is an advantage, as far as in this case screw key comes off less often than in the situation with cross-tip crews. The depth of well is approximately 4 mm, so you won’t have to drip every minute, if you don’t vape at 200 watt. This RDA has an adjustable pin, which allows using it with devices that have a hybrid connector, but some users complain about its leakage. The only sustainable solution is to find an o-ring of required size or to make an isolator on your own. But in fact, such a problem occurs rarely, and there is hope that manufacturer will solve it in the future.

And finally the most important thing – the airflow system. RDA features a top airflow control system. It is quite noisy, but thanks to it this RDA does not leak. As The Fox from The Little Prince said, nothing is perfect. But if there is something close to perfection, it must be the rebuildable dripping atomizer Sapor RDA.