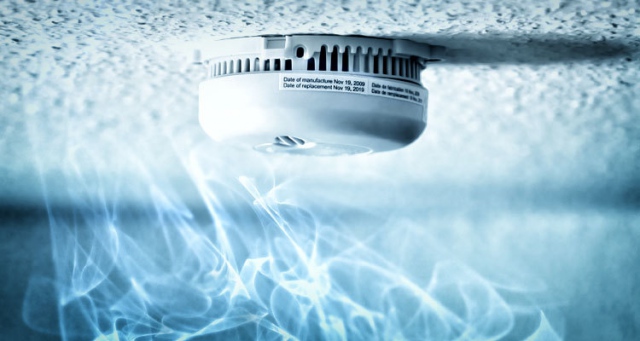 It is no secret that unlike their analogs, e-cigarettes are known for their safety. And even when a tired vaper comes home after exhausting working day, takes his/her favorite eCig and falls asleep in the clouds of vapor, he/she can sleep quietly, carefree and without a fire.

E-cigarettes do not burn and even do not smolder. Of course, if you make some efforts, you may blow up a battery, but there certainly will not be any fire in your apartment. Fire alarms cannot distinguish between different situations. To avoid nerve-racking, we have decided to find out if some vapor could trigger the smoke alarm.

Mechanics of a smoke detector

There are two types of alarm technology: ionization and photoelectric.

Ionization detectors work by using a tiny amount of radiation to create an ionic current between two electrodes. When smoke enters the area, it soaks up the alpha particles, disrupts the current and sets off the alarm. This type of detector is most common in households — it’s usually the least expensive choice and it’s especially sensitive to hot, fast and raging fires.

Photoelectric detectors, on the other hand, forgo the radioactive material for a light beam. Once smoke enters the optical area, it interrupts the beam, effectively scattering the light and sending bits of it toward an alarm-triggering sensor. This option tends to detect slower fires, which makes it more sensitive overall.

Taking into account the very different physical properties of the smoke and vapor, mechanisms of smoke detection are not able to read e-cigarette vapor in the different way that they read standard smoke. However, a system based on the ionization principle of detection is more intelligent. If a photoelectric alarm sounds even due to a paper between twigs, an ionization version takes into account the conductivity of the air.

Naturally, a sharp drop of air composition and its conductivity will turn on a fire alarm, but if you vape slowly and deliberately, nothing terrible will happen. Therefore, if you organize a party or event, it is worth verifying the alarm's "correctness".

See you at VAPEXPO! We promise not to switch an alarm on and not to pour water on you.