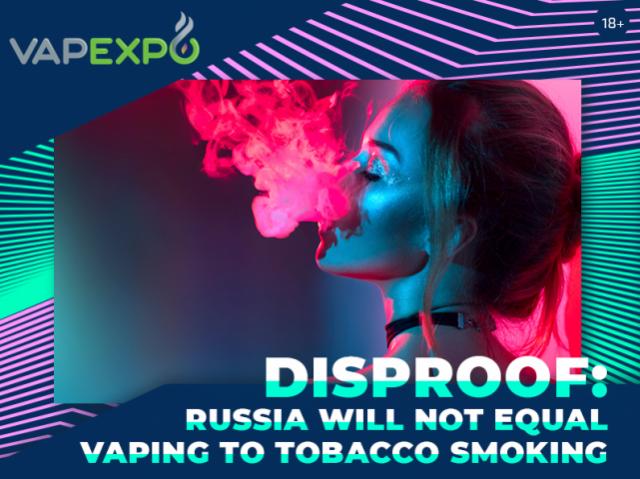 Russian Government Will not Introduce New Bans Related to Vaping

The latest rumors about the strict ban of vaping and its advertising have not been confirmed. Lawyers believe that industry representatives and vapers have nothing to fear about, that is what official documents found on governmental websites say.

No ban to sell e-liquids and devices

Representatives of vape companies and vapers regularly discuss the possible introduction of new restrictions related to vape devices and e-liquids. Earlier, most of the concerns were about the draft law № 119575-7, which summoned to “forbid selling e-liquids and e-cigarettes at exhibitions, remotely, or using delivery service according to article 19”. However, rumors about its adoption have remained mere rumors: according to official data, the draft law was halted on September 24, 2018.

Today the draft law № 296416-7 seems to be the toughest. It offers to equal vaping devices and e-liquids to tobacco and tobacco products that suffer many bans related to their use, distribution, and advertising.

However, this potentially dangerous for the vaping industry draft law did not get a green light at the State Duma of the Russian Federation. The last actions connected to the document (assignment of the committee in charge of making certain amendments to the draft law) were registered on March 4, 2019.

Review of the corrected version was scheduled for the spring session of the State Duma, the last meeting of which took place on July 25, 2019. Moreover, the draft law did not get off the ground, and the final review date was not appointed in the first reading.

Regulation of vaping at the level of the city

City authorities also regulate vaping. On January 30, deputies of Moscow City Duma passed a document about the introduction of amendments to the law of November 21, 2007, № 45 “Code of Moscow about administrative infractions”. It was expanded by the article 2.10.1 about “The involvement of youngsters in the process of using devices that imitate tobacco smoking”.

Now the law sets administrative fines for the popularization of vaping among individuals under 18 years old:

Currently, distribution of vaping devices is not regulated at the federal level.

The state of draft laws about vaping

Draft laws that mentioned vaping regulation appeared earlier as well. Almost all of them either were declined or had no green light, i.e. they were not included in the preliminary plan of reading at the State Duma.

The abovementioned draft laws № 119575-7 and № 296416-7 should not be taken lightly though, as they may be considered in the autumn reading of the State Duma (from August 27 to December 31, 2019). However, the probability of their adoption until the beginning of VAPEXPO Moscow 2019, held on November 30 and December 1, is negligibly small.

Even in the case the draft laws are adopted, there will be a necessity to introduce numerous amendments and follow-ups, taking into account changes in the Federal law № 15-FZ, and other official documents (which will take much time).

As for August 2019, the introduction of new sanction methods or draft laws that forbid using, selling, and advertising electronic vaping devices is not expected. In Russia, there is only one anti-tobacco Federal law № 15 “About public health protection against the impact of tobacco smoke and the consequences of using tobacco”.