Prize pool of VAPEXPO Moscow 2017 contests exceeds half-million rubles! How to get them? | VapeExpo Moscow

Home
VAPEXPO news
Prize pool of VAPEXPO Moscow 2017 contests exceeds half-million rubles! How to get them? 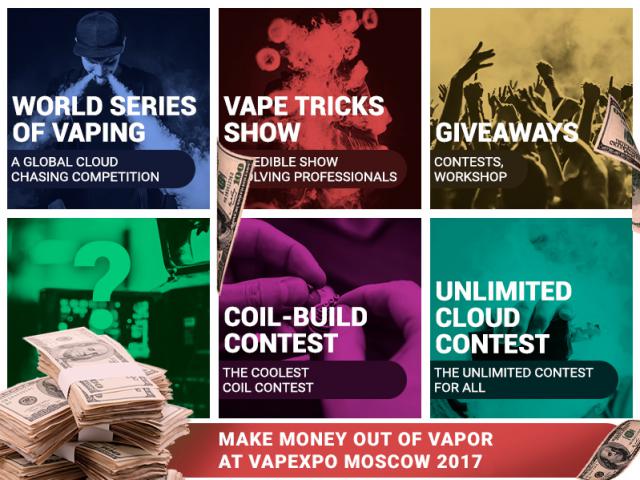 Prize pool of VAPEXPO Moscow 2017 contests exceeds half-million rubles! How to get them?

$500 for video, almost $1500 for cloud chasing, $3000 for quest… While exchange brokers make money out of thin air, vapers make them out of vapor at VAPEXPO Moscow 2017! From 8 to 10 December, Sokolniki ECC will host Russia’s largest vape exhibition with the record-breaking prize pool!

The first day is dedicated to the B2B segment: no loud music and contests but everything for efficient networking. However, on the next two days, you will be able to enjoy really hot atmosphere!

Winning in these competitions will provide you with big bucks!

VAPEXPO Moscow will traditionally feature the international vaping championship called The World Series of Vaping with a prize pool of 200 000 RUB! It will consist of three categories: two of them suppose cloud chasing and the third one supposes vapor tricks. Winners will receive significant sums:

To participate, you should register and confirm your attendance on December 9 near the main stage.

Show your directing skills: create a musical video invitation to VAPEXPO Moscow 2017! The author of the best clip will obtain $500 personally from the lord of Russian rap – Big Russian Boss! Details >>>

VapeLiga, General Sponsor of VAPEXPO Moscow, has prepared one more money surprise! On December 10, the company will hold the greatest contests with a total sum of $10000 aided by Jam Monster!

Competition terms and conditions will be revealed at the event.

Unique mech mods and RDAs by well-known manufacturers: that’s what you will get for the first place in these competitions!

Well, on December 10, you should register to participate in the cloud chasing without rules, Unlimited Cloud Contest, near the main stage and have a chance to obtain Wotofo hardware:

Do you know how to build a powerful coil? If you do, try your luck in the coil building championship: Vape Alliance Coil Build Contest.

The second part of Vape Alliance Freestyle Coil Build Contest will take place on December 10. This championship accepts all types of coils; the main condition is to build it in an hour right onsite. The author of the most beautiful and complicated coil will receive Rockvape 1.0 Atoll Edition Dark Andromeda!

Prior to participation, you should read carefully the rules and details of the coil build contest.

Do not forget to attend the Mech mods Alley: you will be able not only to see the best devices of the year but also to win them!

VAPEXPO Moscow 2017 assures a rich show program: presentation of novelties, Dance Show, giveaways! In general, besides contests, you will be able to enjoy the following activities:

And in conclusion. The country’s most famous rappers – Guf, Slim and Big Russian Boss – have become special guests of the event!

Smile-Expo, the organizer of VAPEXPO Moscow 2017, has 11 years of experience in holding the largest events worldwide.

Do not miss the final vaping exhibition of the year! Registration >>>