Home
Industry news
Just look at this Catemizer from Congrevape 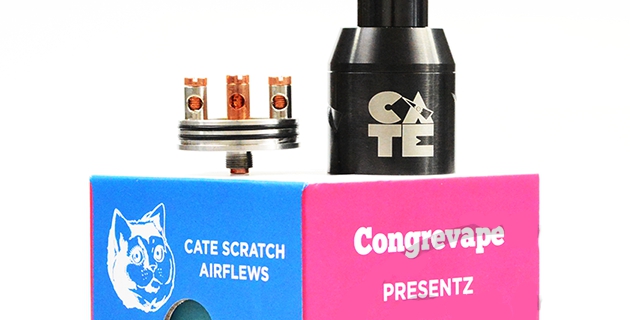 Congrevape is famous for its interest to internet thematic. Recently the company has presented a line of Doge-themed RDAs. And now it turned to cat family. Congrevape has created a new device – Catemizer RDA. Rebuildable dripping atomizer appears to be quite impressive and won’t disappoint potential users.

Catemizer can be described as big, sweet and fat cat. Everything is designed in really positive way. Box has a lot of sweet images and messages, typed deliberately with mistakes. On one side of the package one can find two popular memes: with dog and cat. It proves company’s intention to continue internet thematic. In order to attract more attention Congrevape has also created mini-game resembling Flappy Bird. But the main character of the game is a kitty with catemizer. On the backside there is description of the device. By the way RDA kit has everything you need for using the device: various center posts, o-Rings, screws and screwdriver.

Inside the box there is dripping atomizer. It looks very trustworthy and big logo has credibility. But the main impressive thing is the size of the device – 30 mm. It is obviously not a cat’s size. RDA’s port for airflow is also interesting. It looks like a cat scratch; the technology used is called catescratch. Such idea is not only creative but also very effective, allowing fine adjustment.

Drip tip, a full replica of DOG3’s one, is made of ceramics. It is great if you have both of them. Secure mounting guarantees reliability and usability.

Base is really huge. Screws of the center posts are designed for flat screwdriver only, so that we may assume that this will prevent fast-wearing of the item.

The kit has single center post and dual split positive post. Maybe most of you won’t use single one, but still such a variety is an advantage. Moreover, included in the kit are stainless center posts and screws. It is good solution for those who do not like copper in drip atomizers.

As well as in DOG3, 510 connector is very long. When you use hybrid mechanical mods there is a huge backlash clearance between the devices and it is not very convenient.

Catemizer impresses with its possibilities. It can create any clouds: 100-watt, 200-watt or even 500-watt, if you find appropriate mod. This RDA atomizer is designed to create dense and heavy vapor around the vaper. Compared to its competitors the device creates really mild flavor, probably because of airflow port peculiarities.

What may disappoint the user is connector, designed for unknown box mods. It is a trifle of course, but still it may mar the impression. Nicks-and-burrs on screws and metal grits on the base speak for rather brutal manufacture so it is not to be considered as a disadvantage.

Undoubtedly, Congrevape Catemizer RDA is a unique device and provides experienced vaper with vast opportunities. But to use it every day is not so simple. It is designed for cloud chasers, who strain after the amount of vapor rather than flavor. But for those who already have regular device and would like to upgrade their skills, Catemizer will be a perfect choice. This RDA will let you realize all the possibilities of 5mm coil and 200 watt for vaping hardcore.